Subject: «International Transgender Day of Remembrance 2020: The state to take initiatives to combat racism and discrimination.» 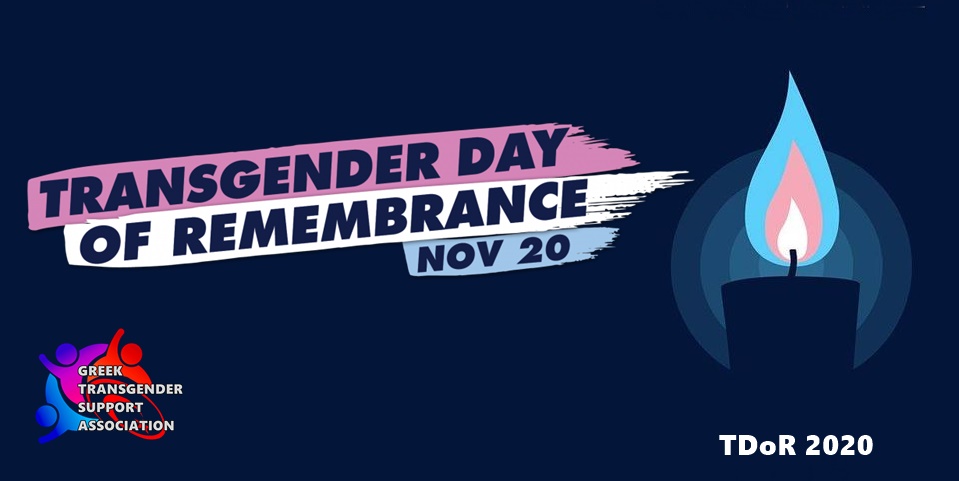 The Greek Transgender Support Association (GTSA), is a voluntary non-governmental organization for the rights and freedoms of trans, gender-diverse, intersex and LGBTI persons in general, as well as sex workers, with this press release, although at the present time it cannot hold open events followed by the remembrance march as it happens every year, due to the pandemic of covid-19, honors the International Day of Remembrance (TDoR 2020), a day of remembrance and honor to trans and gender-diverse people who were murdered in some corner of our planet.

Last year, 350 murders of trans and gender-diverse people were recorded around the world. These are the recorded hate murders, and it should be noted that the actual number may be much higher, as in many countries either trans and gender-diverse individuals are not identified by their true identities, or there are no records at all. The 98% were either trans women or trans people with a female gender expression. The 62% of trans people we know of by profession were sex workers, while 50% were trans refugees or immigrants. Consequently, the most vulnerable trans people are killed, those who face multiple discrimination. Also, the average number of victims was 31 years old, ie very young, while the youngest registered victim was only 15 years old. The 115 victims were killed by gunfire, 68 were stabbed, 25 were beaten, 15 trans people were tortured to death, 8 were strangled, 6 trans fellow human beings were burned alive and 4 were stoned to death. We see that these horror statistics show murders that are particularly heinous and torturous for the victims. In other words, the perpetrators not only wanted to kill, but on the one hand they wanted to express all the savagery they had to their victims, while in this way they wanted to send the message of spreading fear in the trans community.

At the same time in our country, steadily in recent years according to the records of the Racist Violence Recording Network, the rates of racist incidents and discrimination remain high, accounting for about 20% of the total recorded incidents. Recently, a week before Remembrance Day, among the other recorded cases, a violent attack was recorded against a trans woman with a knife that resulted in her being treated for lung injuries, while the incident is being investigated by the Racist Violence Department of Thessaloniki.

All the above data and the realities that trans and gender-diverse persons face in their daily lives, show that it is imperative to take all the necessary steps, both at the level of the State and that of the society, in order to fight racism, intolerance, but also the discrimination faced by our community. Specifically, as the GTSA has repeatedly stressed, it is necessary for the State to proceed with the following legislative or other measures:

1. In the field of combating racism and intolerance:

Α) The Ministry of Justice to move quickly in order to improve and amend Article 82A of the Penal Code (racist crime), in the direction of: a) to add to the categories of protected persons, persons with supposed characteristics as well as human rights defenders, and b) the reinstatement of increased sentences in felony cases to the level before the last amendment of the penal code in cases of crimes of a racist nature.

Β) Also, the reinstatement of Article 361B of the Penal Code which, also during the last amendment of the Penal Code, was removed and concerned the prohibition of refusing disposal of goods and services with a racist background.

C) The amendment of Law 4285/2014 (anti-racism law), in order to expand the scope of the fight against racist speech and not only to incite violence, hatred or discrimination, but the whole spectrum of hate speech.

D) Make adjustments for dealing with the public dissemination, distribution, production or storage of racist material (as recommended by the Council of Europe).

E) Regarding the spread of racist rhetoric, specifically in the Greek Parliament, targeted and systematic measures are required to eliminate institutionalized racism. In this regard, we consider of particular importance the recommendation of the UN CERD Committee to take measures to prosecute hate speech by politicians. In fact, the United Nations Committee has requested information on the prosecution and criminalization of such acts.

2. In the field of strengthening equal treatment and non-discrimination:

Α) To add sexual orientation, gender identity and sex characteristics to the areas: a) social protection, including social security and health care, b) social benefits and tax incentives or benefits, c) education, and , d) access to the disposal and provision of goods and services available to the public (transactional or not), including housing, in Article 3, par. 2 of Law 4443/2016.

C) Regarding the particularly important field of equal treatment in the field of health: a) Ensuring equal treatment without discrimination in the field of health regardless of whether a person has changed the registration of gender and name in all opinions, examinations, prescriptions considered that they are of a “gender” nature, b) The amendment of the Code of Medical Ethics, in order to add to the anti-discrimination article the gender identity and sex characteristics, c) The full insurance coverage of gender reassignment surgeries, as well as to fully cover the insurance of hormone therapy without participation, d) The compliance of our country with the decision of the World Health Organization by removing the so-called “gender identity disorder” from the national list (with the consequent removal of a relevant Presidential Decree on conscription and security forces), e) Prohibition of the practice of genital surgery on intersex persons at a very young age – even in infancy – without the possibility of consent, as well as the prohibition of the practice of so-called “conversion therapies” for reasons of sexual orientation or gender identity, f) To lift the existing completely anachronistic and unacceptable prohibition of blood donation.

3. In the field of legal recognition of gender identity:

Α) To make the process out of court with the best declaration in the Registry, as well as to shorten subsequent procedures in order to meet the European standards that require fast, transparent procedures and based only on self-determination,

Β) To remove the restrictive conditions for married trans persons, the age limits as well as to abolish the medical procedure for persons 15-17, while to give the possibility to change the documents of any children in order to reflect in them the change of their documents of their parents,

D) Provision should be made for procedures for trans persons seekers international protection or refugees, as well as for migrants,

Ε) There should be additional regulations regarding the recognition of gender identity in educational institutions (mainly in schools, the possibility of regulation regardless of whether the documents have been changed and the possibility of using the toilet or locker room according to gender identity and according to the recommendations of the Ombudsman Citizen, or even the use of a neutral toilet).

4. Other measures or good practices:

Α) Revision of the completely obsolete law 2734/99. Sex work must be governed by the exact same rules and legislation as happens in any work, to protect the rights of people who work in sex, but also to eliminate stigma and protect these persons from discrimination and full securing labor rights.

Β) Revision of the legislation for the Penitentiary Establishments, so that the expression, gender identity and sex characteristics, personality and human rights of trans and intersex detainees are fully respected.

C) Amendments to asylum legislation to: a) Include LGBTI people in vulnerable categories and in particular trans and gender-diverse persons, b) Abolish the existing list of “safe countries” as it includes countries where persons persecuted on grounds of sexual orientation and gender identity, while in general, c) the time frame must be not so suffocating, the three-member committees are not purely judicial as this regulation is unconstitutional and in general to have all the guarantees required by international law and the existing legislation has been lowered at the minimum.

F) Creation through the National Health System of a safe guide for people wishing to enter the transition process, which will include clinics-hospitals with specialist doctors, as well as creation of anti-discrimination guidelines for reasons of sexual orientation, expression, gender identity and sex characteristics in health services.

G) Media: In the direction of awareness and prevention, training seminars are necessary, but also the dissemination of messages of respect for diversity and human rights, in the direction of combating racism and intolerance, as well as targeted intervention with messages (television, radio or print).

Η) Creation of a program and submission of relevant circulars of the Ministry of Education against discrimination, in the direction of consolidating an anti-discrimination wall for teachers, parents, pupils, students and cultivating a climate against homophobia and transphobia in all educational institutions of all levels.

The Greek Transgender Support Association, on the occasion of the International Transgender Day of Remembrance, which unfortunately this year cannot be honored with open public events, calls on the State to take immediate initiatives with relevant legislative measures, especially in the field of combating racism, intolerance and discrimination, ensuring human rights and freedoms for trans, gender-diverse and intersex people. No more victims of transphobic hatred!